Back to news articles

Beards and Brows remain big business on the high street

The study, which was undertaken by the Centre for Economic and Business Research (Cebr), also found that the typical high street now contains an average of 11 independent cafes, seven independent barbers, four independent beauty salons and one independent vape shop. Independent retailers account for two thirds (62 per cent) of stores on the high street.

Trevor Studd from The British Barbers Association, said: “The rise in personal grooming does not come as a surprise at all – some high streets have ten or more barbershops and men’s grooming operations now. There has definitely been a growing migration of men going back to barbershops from unisex salons in the past three to four years and this doesn’t seem to be slowing down.

“Like any industry that has a renewed spike in numbers, supply will grow to meet demand. However in such a personal industry, skill, and the level of service offered will determine how many of those shops will still be open in two years’ time.”

Jo Goodman, Director of Sales and Marketing at Habia (Hair and Beauty Industry Authority), adds: “The UK beauty industry is big business, employing more than a million people and contributing billions of pounds to the economy.

“SME salons contribute heavily to this success, from high-end luxury services to hair salons and budget nail bars, with the number of new salons/businesses growing by 5.95% over the past year. The prevalence of social media has been particularly influential in fuelling this growth, with high-profile celebrity trendsetters – both male and female – helping to drive demand.”

Driven by the continued growth in the popularity of coffee and consumers embracing new trends such as cold brew coffee, independent cafes have also surged in numbers. Independent cafes and tearooms have recorded a net increase of 337 units over the last year, with six additional cafes joining the UK retail landscape each week in 2015.

The most surprising resurgence has come from independent tobacconists, who were spurred on by the recent boom in vaping. Independent vape shops accounted for 334 new independent stores in 2015, an increase of more than 50 per cent. 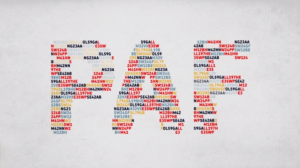 Steve Rooney, Head of Royal Mail’s Address Management Unit, which manages the Postcode Address File, adds: “The analysis reveals a trend I’m sure shoppers will recognise from their own high street: independent retail is booming. This is great news for communities, as both businesses and consumers benefit when independent retail is growing. From beard grooming to vape shops, the types of businesses going from strength to strength show that entrepreneurs can move fast when it comes to spotting and responding to emerging consumer trends.

“The UK’s retail landscape changes on a daily basis, whether it’s a shop changing its name or moving premises. We make between four and five thousand updates to the Postcode Address File every day to ensure that consumers and businesses can not only locate services but also effect and enjoy online delivery.”

New Royal Mail research reveals that 1 in 10 British named homes look to love and all its wonders for moniker inspiration. There are over 24,000 UK streets and houses … read more

The August 2022 statistics for the Postcode Address File (PAF®)...

We’ll update this information week commencing 19th September 2022, following the PAF product run. If you would like to receive the monthly PAF stats by email, please let us know … read more

After a public consultation Thurrock council approved the formal changing of the name Purfleet to Purfleet on Thames in January 2020. As a result, we will be changing the Post … read more

We use cookies on our website to give you the most relevant experience by remembering your preferences and repeat visits. By clicking “Accept”, you consent to the use of ALL the cookies. However you may visit Cookie Settings to provide a controlled consent.
Cookie settingsREJECTACCEPT
Manage consent

This website uses cookies to improve your experience while you navigate through the website. Out of these cookies, the cookies that are categorized as necessary are stored on your browser as they are essential for the working of basic functionalities of the website. We also use third-party cookies that help us analyze and understand how you use this website. These cookies will be stored in your browser only with your consent. You also have the option to opt-out of these cookies. But opting out of some of these cookies may have an effect on your browsing experience.
Necessary Always Enabled
Necessary cookies are absolutely essential for the website to function properly. These cookies ensure basic functionalities and security features of the website, anonymously.
Functional
Functional cookies help to perform certain functionalities like sharing the content of the website on social media platforms, collect feedbacks, and other third-party features.
Performance
Performance cookies are used to understand and analyze the key performance indexes of the website which helps in delivering a better user experience for the visitors.
Analytics
Analytical cookies are used to understand how visitors interact with the website. These cookies help provide information on metrics the number of visitors, bounce rate, traffic source, etc.
Advertisement
Advertisement cookies are used to provide visitors with relevant ads and marketing campaigns. These cookies track visitors across websites and collect information to provide customized ads.
Others
Other uncategorized cookies are those that are being analyzed and have not been classified into a category as yet.
Non Necessary
Any cookies that may not be particularly necessary for the website to function and is used specifically to collect user personal data via analytics, ads, other embedded contents are termed as non-necessary cookies. It is mandatory to procure user consent prior to running these cookies on your website.
Uncategorized
Undefined cookies are those that are being analyzed and have not been classified into a category as yet.
Save & Accept